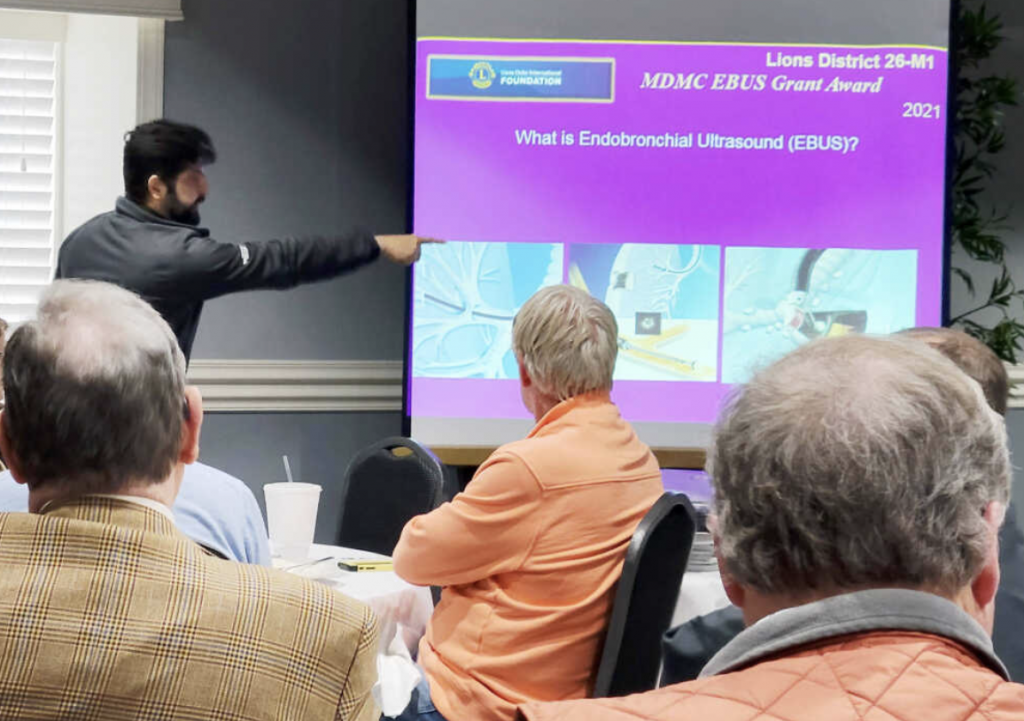 SIKESTON — A new tool that provides the earliest detection and staging of lung cancer will soon be available to Sikeston-area residents.

Missouri Delta Foundation is the recipient of a matching grant from the Lions Club International Foundation in the amount of $84,000. The total cost for the project was $168,000 — of which $84,000 was raised locally.

The application for the grant was led by Missouri Lions District 26-M1 along with local area Lions clubs including Sikeston, Malden and Essex.

Sikeston Lions Club member Rodney McConnell said when he previously served as a Lions district governor, he was made aware of the grants available through the Lions Clubs International Foundation, which was established in 1968.

During discussions with Schrumpf, McConnell said he learned information that showed surrounding counties had among the highest rates of lung cancer in the state, signaling a need for early intervention and screening.

“Lung cancer frequently doesn’t have any symptoms until its advanced, and the mortality rate is higher than other cancers,” McConnell said.

Schrumpf told McConnell the hospital was looking to acquire the lung cancer technology that enables early detection and staging of lung cancer to decrease mortality. They also were looking too add a pulmonologist.

So McConnell and Schrumpf co-wrote the grant.

“I thought the grant and the project were a perfect fit for each other,” McConnell said. “We worked together to file an application for the grant.”

In May, they learned the grant application had been approved and have been working ever since, primarily through the Missouri Delta Foundation, to raise money from local donors and match the grant money.

“Lions Clubs International donated the money after we applied with a grant request and then we had to match it,” McConnell said.

They were given six months to raise the matching portion of $84,000, McConnell said.

“It’s $84,000 coming into our community from an external source that we didn’t have to raise locally – if we didn’t have that grant, it would have taken longer and obligated local funds that might have been spent for other things,” McConnell said of the matching grant.

To McConnell’s knowledge, this is the largest donation the Lions Club in Sikeston has ever made to any project in a community. He noted other local civic organizations and individuals also made contributions to the fundraising effort.

Missouri Delta’s new pulmonologist, Dr. Muhammad Ehtisham, presented at the meeting information on how the technology will be utilized for early detection and staging of lung cancer in the MDMC service area.

“Dr. Ehtisham is an asset to our medical staff and we are very fortunate to have someone with his training and expertise in Southeast Missouri,” Alcorn said.

Alcorn said the pulmonologist and EBUS will be an asset to the community.

“Unfortunately, the go-live date has been delayed due to supply chain constraints obtaining the necessary accessories for the EBUS,” Alcorn said on Dec. 16. “We are hopeful for the delivery of the accessories in the coming weeks.”