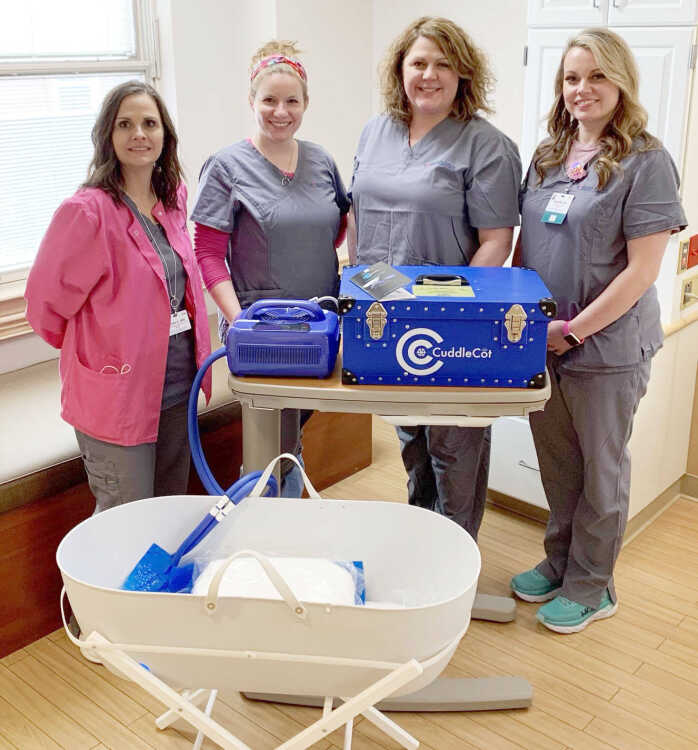 SIKESTON — When a baby dies before it’s born or shortly after, parents often do not have much time with their child or the opportunity to say goodbye.

Now bereaved parents have the option to spend more time with their baby at Missouri Delta Medical Center. Thanks, to the recent donation of the CuddleCot system to the Sikeston hospital’s Maternal Child Department.

Ashlie Woodward, registered nurse with a Bachelor of Science in nursing who has worked five years in MDMC’s Maternal Child Department, said she and her co-worker and nurse, Amy O’Brien, had been trying to get a CuddleCot at the Sikeston hospital for a while now.

“We knew about the CuddleCot that would cool the baby and allow the baby to be in the mother’s room longer so they could bond with the baby, hold them or take pictures,” Woodward said.

Then, Woodward said, she saw a post on a Facebook group. There, she learned about Ashlie’s Embrace, which donates CuddleCots all across the United States, and at the time, Missouri was one of the states the organization was wanting to reach.

“It was literally the easiest thing I’ve done,” Woodward said of the process for the hospital to receive a CuddleCot. “Erin immediately said absolutely, and we just had to get an acceptance letter together.”

According to Ashlie’s Embrace official website, Erin and Anthony Maroon’s first child, Ashlie, was stillborn at full-term in October 2015. They could not keep her at room temperature because of the natural changes that occur after death, but the freezing temperatures of the hospital’s cold room were changing her small features too quickly, according to the website. After less than an hour with her and still in shock over their loss, the couple had to say goodbye to their baby girl forever.

Erin Maroon said she later learned about the CuddleCot system invented in Britain which helps preserve the body of a deceased newborn for days. According to Ashlie’s Embrace, the CuddleCot cooling pad is placed in any Moses basket, crib, pram ora bed. It is connected by a specially insulated hose and is quietly cooled using the cooling unit. The baby can then stay with the parents for as long as necessary at the hospital.

Maroon and her husband then founded Ashlie’s Embrace to provide CuddleCots to U.S. hospitals so parents have more time to hold their baby and say goodbye.

In addition, the CuddleCot is internationally recognized across the world as helping parents who suffer the loss of a baby, according to the Ashlie’s Embrace website. It is used extensively in the United Kingdom, where more than 95% of British, Scottish and Irish hospitals and hospices utilize one or more CuddleCots. It is also used in other European and Australian hospitals.

Each year, more than 24,000 babies are stillborn in the United States alone.

Missouri Delta Medical Center used the CuddleCot for the first time this month. Woodward said it’s made all the difference for the mother.

“She’s been wonderful. So far, she’s used it for 30 hours, and CuddleCots can be used up to 96 hours,” Woodward said at the time.

Prior to MDMC using the CuddleCot, the nursing staff would let the family keep the baby in the room as long as possible, Woodward said.

“However, the condition of the baby’s bodies deteriorate quickly being in a warm room, and it impacts their color and skin integrity very quickly,” Woodward said, adding without a CuddleCot, parents would have a few hours or half a day at best with their children.

The extended time with their baby allows families to form an important bond with their baby, whether changing a diaper, dressing the baby or holding them can help families in dealing with their loss, Woodward said.

“It’s something that even if you haven’t experienced it, you know someone who has experienced the loss of a baby,” Woodward said.

She also noted the nursing staff appreciates the extra time given to families, too.

“It’s been nice to not feel like we’re rushing them,” Woodward said of using the CuddleCot. “Using the CuddleCot gives families a little more peace, comfort and essential bonding time with their baby.”